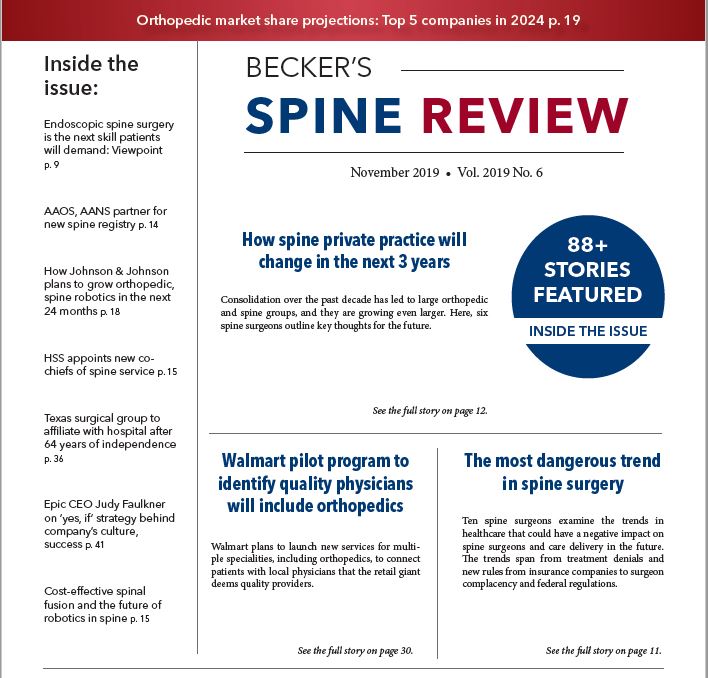 Endoscopic spine surgery is the next skill patients will demand: Viewpoint

A new partnership between two professional specialty organizations will yield a spine registry that will allow all spine surgeons in North America to collect and share quality data.

How Johnson & Johnson plans to grow orthopedic, spine robotics in the next 24 months

Johnson & Johnson is looking to robotics and digital surgery to drive future innovation and growth in the healthcare and orthopedics space.

Victoria (Texas) Surgical Associates plans to become part of Citizens Medical Center after 64 years as an independent practice, according to the Victoria Advocate.

Judy Faulkner, Epic founder and CEO, discussed the culture she has spearheaded at the EHR company and why she values a "yes, if" approach to strategy during The Cap Times Idea Fest Sept. 14 in Madison, Wis., according to The Cap Times.

Dr. Jaime Nieto: Endoscopic spine surgery is the next skill patients will demand
Jaime Nieto, MD, is chief of the sec¬tion of neurological surgery and spine surgery at Flushing-based NewYork-Presbyterian/Queens.

Sanford Health sends termination notice to neurosurgeon accused of Medicare fraud
Sanford (Calif.) Health terminated a neurosurgeon shortly after the government decided to inter¬vene in a whistleblower lawsuit alleging that he committed fraud, according to the Argus Leader.

Dr. Scott Lynch sues Penn State for $50,000, alleges interference with medical decisions for athletes
Scott Lynch, MD, an orthopedic surgeon and former direc¬tor of athletic medicine for State College, Pa.-based Penn State, sued the school and multiple officials, alleging they interfered with medical decisions and then retaliated against him after he reported it, according to Onward State.

How spine private practice will change in the next 3 years

AAOS, AANS partner for new spine registry
A new partnership between two professional specialty organizations will yield a spine registry that will allow all spine surgeons in North America to collect and share quality data.

Dr. James Chappuis on how to improve OR efficiency and deliver cost-effective spinal fusions
Spine surgery utilization, cost in the US: 5 key findings

How Johnson & Johnson plans to grow orthopedic, spine robotics in the next 24 months

What Stryker’s spine division stands to gain from 5 acquisitions

HSS Spine’s new co-chiefs on the goals for their tenure, the biggest issue in spine

Walmart pilot program to identify quality physicians will include orthopedics

The state of BMP in spine surgery today

Where physician salaries are growing the fastest — Seattle is No. 1

What should change in spine care over the next 5 years?

Optum has 50,000 employed, affiliated physicians and a vision for the future

PAs & NPs are the highest paid, fastest growing jobs in these states

5 highlights from a USPI center’s first months in operation

Cambia, BCBS of North Carolina call off affiliation for now