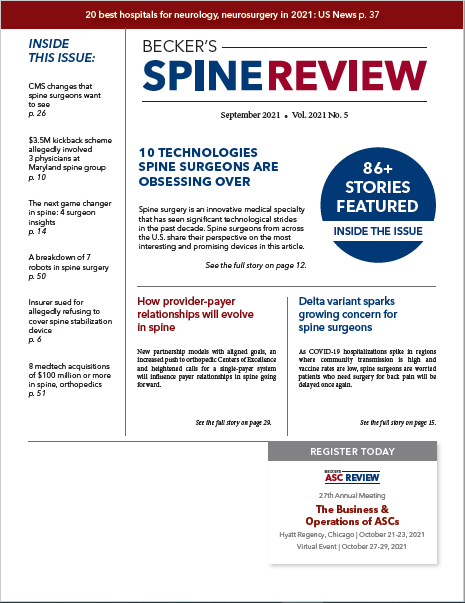 10 technologies spine surgeons are obsessing over
Spine surgery is an innovative medical specialty that has seen significant technological strides in the past decade.

How provider-payer relationships will evolve in spine: 4 surgeons weigh in
New partnership models with aligned goals, an increased push toward orthopedic Centers of Excellence and heightened calls for a single-payer system are among the major trends these four spine surgeons see over the next five years.

Delta variant sparks growing concern for spine surgeons
COVID-19 cases and hospitalizations continue to spike, particularly in regions with higher levels of community transmission and lower vaccination rates, and spine surgeons are worried that elective surgeries in these areas could be affected once again.

The next game changer in spine: 4 surgeon insights
From telemedicine to augmented reality and the advancement of single-position procedures, the technology that will have the most significant effect on the future of the field is discussed by four spine surgeons.

A breakdown of 7 robots in spine surgery
The Mazor SpineAssist was the first robot approved by the FDA to guide the placement of pedicle screws in 2004.

Insurer sued for allegedly refusing to cover spinal stabilization device
A Florida woman is suing Anthem, alleging that the insurance company didn't cover a spine device that should have been covered under the Employee Retirement Income Security Act, designed to provide protections to as well as setting rules for employer-sponsored health insurance plans.

Lumbar disc replacement coverage case against Aetna to move forward
A lawsuit over Aetna Life Insurance's spine surgery coverage that was originally dismissed in 2019 will now go forward, according to a motion granted June 11.

Insurer sued for allegedly refusing to cover spinal stabilization device
A Florida woman is suing Anthem, alleging that the insurance company didn't cover a spine device that should have been covered under the Employee Retirement Income Security Act, designed to provide protections to as well as setting rules for employer-sponsored health insurance plans.

Why Centers of Excellence are becoming more prominent in spine
More healthcare organizations are seeking partnerships with talented spine surgeons to become designated as a Center of Excellence, which takes an integrated, multidisciplinary approach to care.

Do spine robots currently offer more hype than clinical value?
Spine robots have proven effective in assisting surgeons with the placement of pedicle screws, but lag behind the capabilities of robots in other medical specialties such as urology and general surgery.

CMS changes that spine surgeons want to see
Surgeons and specialists are bracing for another challenging year as further Medicare reimbursement cuts are planned, with commercial payers likely to follow suit.

'All instrumentation will be absorbable': 2 surgeons predict the future of spine
From the growth of robotic technology to the increasing role artificial intelligence and machine learning will play in spine, bold predictions about the future of the specialty are shared by two surgeons.

Physicians likely to seek new contracts as their productivity soars, pay drops: 6 report details
Physicians were more productive in the second quarter of 2021 than in 2020, but pay has declined, according to a new report from KaufmanHall.

NuVasive lifts hold on scoliosis rods recalled in 2020
NuVasive has lifted a U.S. voluntary ship hold on its Magec system and made a modified Magec X device available for sale, effective July 15.

Bioventus to acquire spine company for $518M
Bioventus has entered an agreement to acquire Misonix for $518 million in a cash-and-stock transaction.

HCA New Hampshire hospital loses 12 physicians as interim CEO takes helm
Twelve of 14 primary care physicians on staff have left or are in the process of leaving practices affiliated with Frisbie Memorial Hospital, a 112-bed hospital in Rochester, N.H., according to Foster's Daily Democrat.

Walmart files to provide healthcare in 37 states as it pushes deeper into telehealth
Walmart has filed paperwork to operate its healthcare business in 37 states, Insider reported July 19.

Physician lives at Tennessee hospital to be available around the clock
Big South Fork Medical Center in Oneida, Tenn., is one of dozens of rural hospitals across the country struggling to keep its doors open.