On November 1, 2016, the Centers for Medicare & Medicaid Services (CMS) released the 2017 Hospital Outpatient Prospective Payment System (OPPS) and Ambulatory Surgery Center (ASC) Payment System final rule. The policy changes contained in the rule signal that the reimbursement environment for spine surgery is continuing to evolve, and this shift is not confined to Medicare. Commercial payors are fully expected to react to the CMS rule with updates of their own. What does this mean for ASC owners and operators? All ASC stakeholders must familiarize themselves with the rule changes and assess the impact on their practices and care patterns. In the case where providers determine that there are potential adverse effects, they should reach out to their commercial payors ahead of January 1, 2017, when the rule goes into effect. Providers may also want to reach out to optimize potential new reimbursement opportunities created by the rule.

CMS acknowledged that it is possible to deliver safe, effective, and lower-cost spine care in a freestanding ASC in its 2015 payment ruling, which added nine surgical spine codes to the list of ASC covered surgical procedures. Improvements in technology and clinical standards have made it possible for these procedures to be performed in the ASC setting with favorable outcomes and without an overnight hospital stay. These are key criteria that CMS considers when approving surgical procedures for the ASC list that were previously only allowed in the HOPD or inpatient setting. The 2017 rule is an expected update, with many of the changes continuing the trend of moving higher-acuity cases to the outpatient setting. This article explains the four categories of CPT spine code changes included in the rule—new assignments, removal from the inpatient-only (IPO) list, additions to the ASC covered list, and rate adjustments for 2015 code additions. It also comments on the broader impact of the rule within the context of today’s healthcare environment and the varying methodologies payors use to set reimbursement rates.

There are some “wins” here for ASCs. Four of the new assignments are for insertion of an interspinous process stabilization or distraction device without fusion (22867, 22868, 22869, and 22870), and the initial-level codes (22867 and 22869) will be reimbursed. The additional-level codes (22868 and 22870) will be packaged with no additional reimbursement. These procedure codes are taking the place of temporary codes 0171T and 0172T (code 0171T was previously on the list of ASC covered procedures as a device-intensive procedure due to the cost of the implant being greater than 40% of the payment). This group of four codes presents an opportunity for ASCs that work with physicians who are currently providing these procedures in the hospital setting to move them to the ASC. There is also a payor negotiating opportunity if an ASC has previously attempted to negotiate for reimbursement for temporary code 0171T and met with resistance. It is very typical for payor network management to decline to contract for temporary codes or for payor medical directors to hesitate to approve exceptions to standard contracting for temporary codes; the addition of permanent codes creates a better environment for parties to return to the negotiating table.

There is also a new procedure code for lumbar endoscopic decompression of the spinal cord (62380), which is payable in the ASC as a device-intensive procedure, thus presenting another possible reimbursement negotiating opportunity for ASCs with physicians who perform the procedure.

For CY 2017, the AMA CPT Editorial Panel deleted CPT code 22851 and replaced it with three new codes to identify the insertion of an interbody biomechanical device with integral anterior instrumentation for device anchoring (e.g., a cage with anchoring screws). These are excluded from payment in the ASC setting (22853, 22854, and 22859) and do not present any new reimbursement opportunities from Medicare. However, commercial payors could be open to discussing reimbursement for these devices. In addition, ASCs with commercial contracts that reimburse for CPT code 22851 will want to ensure that the same rates transfer to the new codes.

There is some good news here too. CPT codes 22840, 22842, and 22845 represent spinal instrumentation procedures considered to be add-on codes to spinal fusion procedures that are currently performed in the ASC setting. CMS is removing these three spine codes from the IPO list and moving them directly onto the ASC covered list, which will facilitate discussion with the commercial payors as ASCs seek to negotiate contracts to perform these services. Procedure code 22858—total disc arthroplasty (artificial disc), anterior approach including discectomy with end plate preparation; second level, cervical—is being removed from the IPO list but will continue to be excluded from the ASC list of covered procedures because of the final rule, in which CMS states that this procedure “would generally be expected to require at least an overnight stay” for recovery. Nevertheless, taking this code off the IPO list gives ASCs the opportunity to approach their commercial payors to seek reimbursement for this procedure. In addition, ASCs that have spine surgeons who are already performing single-level total disc arthroplasties (22856) are well positioned to extend this service to a second cervical level. It is possible that some commercial payors will make changes to their medical policies and/or incorporate this code into their reimbursement methodologies, allowing this procedure in the ASC setting.

Eleven Additions to the List of ASC Covered Surgical Procedures

Three of these additions are spine-specific autograft codes that include the harvesting of the graft (20936, 20937, and 20938). Six are instrumentation codes for spinal fusion (22840, 22842, 22845, 22853, 22854, and 22859). The final two procedure codes (22552 and 22585) are the procedure codes for the second level of both anterior cervical disc fusion (ACDF) approaches; this has become a more common outpatient procedure in the past several years. The final rule from CMS lists these codes with a payment indicator of N1 for packaged procedures with no separate payment made. Unfortunately, this means that it will still not make good financial sense to transition healthy Medicare patients to the ASC setting for these procedures.

This forces commercial payors to make an important decision. They could follow CMS by pricing these codes as add-on procedures with zero reimbursement, thereby creating a case rate for the primary codes for cervical (22551 and 22554) and lumbar (22612) fusions. Alternatively, they could integrate these codes into their existing payment methodologies and create more of an economic incentive for spine surgeons to migrate care to ASCs. This ruling will signal to payor medical directors that the spine cases moving to the CMS ASC covered list are safe in the ASC setting and that they no longer will always require an overnight stay, which should incentivize them to price or negotiate rates with ASCs that allow their surgeons to perform these cases and continue to bend the overall healthcare cost curve. 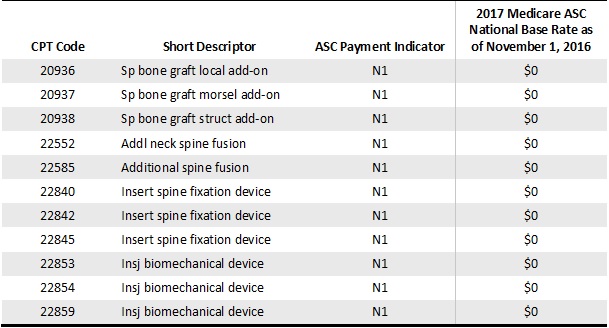 Rate Adjustments for Codes Added in 2015

Overall, the rate changes that have been approved for the last two years are probably not significant enough to sway ASCs to start performing new procedures for Medicare beneficiaries. For example, the primary ACDF code (22551) reimbursement is decreasing by 10.7%, and that actually further disincentivizes physicians from performing these surgeries for healthy Medicare patients in the ASC space, despite the fact that it’s a lower-cost setting. The primary code for a posterior lumbar fusion (22612) is increasing by 40.8% after decreasing last year by 55%, but this does align the rate with the cost of this procedure. Also, the widely performed lumbar laminotomy code (63030) reimbursement is increasing by 6.5%, but, again, the rate is inadequate. The overall theme here is that these rates are not substantial enough to incentivize physicians to perform these cases in their ASCs. It appears that CMS is not considering the individual case cost, including the high cost of implants for fusion cases or the capital requirements needed for equipment to perform these cases—often several hundred thousand dollars. ASC operators with commercial payor contracts with ACDF reimbursement that is based on Medicare rates should contact their payors to discuss some of the adverse changes to their expected reimbursement.

The table below details the procedure codes that were added to the ASC approved list in 2015 and the rate adjustments after that ruling. 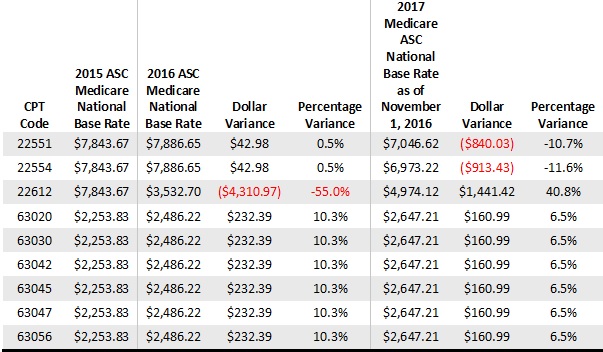 The degree to which the CMS ruling will benefit surgeons, ASCs, and other interested parties hinges on the decisions that payors make about pricing all of the spine CPT codes included in the rule. Several regional and national payors have moved to an APC-based methodology for new contract negotiations. These payors are likely to follow CMS by adding new spine procedures to their fee schedule and pricing many of them at zero dollars, making it less lucrative, and perhaps even cost prohibitive, for ASCs to perform these procedures. Conversely, the payors that continue to operate on a proprietary payment system, which are the majority, are likely to approve and price these procedure codes, which will potentially provide for some degree of reimbursement and room for negotiation of rates for ASCs that want to perform these procedures.

Regardless of their payors’ reimbursement model, spine centers must be diligent in investigating how these procedures are handled within their existing contract reimbursement methodologies and also be on the lookout for upcoming changes—it is virtually guaranteed that commercial case-level payment will be impacted by this CMS ruling. Some payors will implement changes on January 1 when the rule goes into effect, while others will wait until the end of the first quarter in April, and still others will make changes mid-year at the beginning of July. ASC owners and operators, as well as spine surgeons, should begin conversations with their payor representatives now to equip themselves with the necessary rate information from their contracts and be prepared to renegotiate contract terms if payors introduce adverse changes to their overall case-level reimbursement.

Today, reimbursement often determines the care setting, and the ASC remains the exception rather than the rule. However, that may change as patients who are increasingly exposed to financial risk through higher out-of-pocket expenses become more cost conscious. Tung Ha, DO, a neurosurgeon at Fourth Corner Neurosurgical Associates in Bellingham, Washington, who practices at Cascade Outpatient Spine Center, shares that some of his patients are already asking to have their surgeries performed in the ASC because they are aware that the cost is lower than in the hospital. Dr. Ha and many other surgeons believe that the ASC should be the first-choice setting for surgery, with the hospital being selected only if the ASC is not clinically appropriate. This paradigm shift will require a major change in the reimbursement of these procedures by CMS and other payors. For now, ASCs can move the conversation in the right direction by staying informed.